Roxafan 2089 AD by AngryGam3rs is a homage to the classic horizontal scrolling shoot-em-ups of the early 90s for platforms such as the Sega Megadrive (Genesis) and PC Engine.  It simply tries to recreate the same look and feel as those games to give you a real sense of nostalgia – and it certainly manages that with some style!

A great bonus is the awesome soundtrack to the game, provided by German heavy metal band Thunder and Lightning – it’s absolutely stomping and fits the game perfectly.  The sound effects were less impressive and were set at a volume that was just a tiny bit intrusive to the music.  The graphics had that sort of very slightly fuzzy appearance that you tended to get in some early 90s games, and this added to the retro charm; on the whole the graphics were very good and the levels are quite varied.  On the first level I felt that perhaps there should have been an extra layer of parallax scrolling, but that’s a minor quibble – it all looks very good and very reminiscent of the era it’s inspired by. 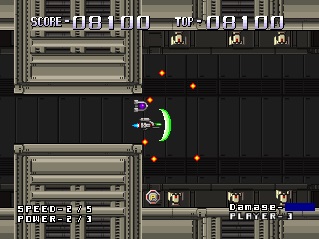 The controls work fine, even on the keyboard they feel nice and responsive.  The game’s difficulty level is nicely balanced, and even though it does feature the “when you die you lose EVERY power up you’ve worked so hard to collect” method (which has always driven me mad with this sort of game!) and restarts you at the beginning of the level every time you die, there are enough power-ups scattered around early in each level to make it possible to stay alive.  As with these sorts of game in days gone by, staying alive even when fully powered up is by no means easy, of course!

Really, Roxafan’s strengths and weakness all derive from the same thing – it stays true to its roots and everything about the game is very much in the vein of those early 90s shooters.  As such you get a huge nostalgia rush from playing this, and the soundtrack definitely adds to the game immensely, and it’s very nicely made.  On the other hand I would have liked to see more in the way of options and customisation.  I would also have liked to see a bit more variety with the bosses, but that’s a minor point.

It really depends on what sort of gamer you are.  There are some concessions made to the more modern gamer but basically this isn’t a game that will hold your hand with a gentle introduction, it just throws you straight into the action – just like the good old days.  It encapsulates the old adage “easy to play, difficult to master”.  It’ll take you a fair time to complete, and the reply value for a game like this is high.  The $5 price point seems just a touch high for the game at the moment but more is on its way, with extra stages and a co-op game mode for up to 4 players, which should prove to be a blast, so I have no hesitation recommending it to those who like retro shooters.  If you don’t get nostalgic at the thought of R-Type and similar games, perhaps this isn’t a game that will do it for you. 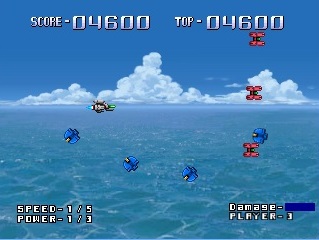 Roxafan 2089 AD is available for PC (reviewed version) and is coming soon to Xbox.  As a result of an ill-phrased challenge in an email to me, you can also expect ports for the MSX, Dragon 64 and even ZX81.  (Well not really, but wouldn’t it be cool if there were?!)  It IS due to be released on Windows 8 Phone, iPhone, Android, PS3, PS4, Xbox 360, Xbox One and apparently even more after that...  The most excellent soundtrack is available separately.  Check out the official website for more info and to order.

The specs for running the game are so low that even though the laptop I’m having to subsist on at the moment is horrendously underpowered for gaming, it ran Roxafan 2089 AD with no problems at all.

An interesting side point – the game’s author, Gary Bradford, thinks this may be the first full game to be released (or possibly released commercially) that was created using EnterBrain’s Indie Game Maker.