Designing a game specifically for 1-4 year-olds must be a pretty daunting prospect, but Italian indie dev Fabio Bassan has done a pretty good job with Baby Race.  The game is split into two sections - car customisation and the race itself.  In the first you can change your vehicle type, colour, wheels, decals and suchlike - my little girl (two and a half) probably had more fun with this bit.  I suspect that the older your child gets, the more they will like the race itself. 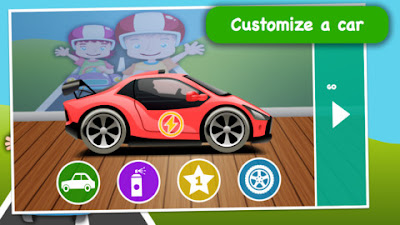 You get an opponent car, and every so often an icon will appear above them - pressing them will usually help one or the other of you.  They are usually logical (ie a rocket will speed you up) but sometimes the effect appears to be a little random.  If you win, you get a nice congratulations screen and applause.  If you lose... you get exactly the same - you can't actually "lose" as such, so your child is unlikely to get upset with it.  My little one has started to understand the concept of racing, but not particularly winning or losing, so this kind of game concept is just right for her.  She can enjoy it without getting upset if she loses! 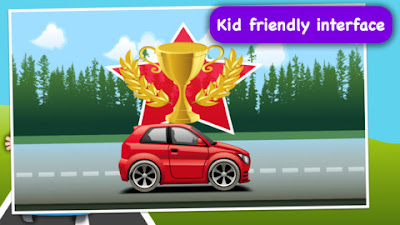 With different scenarios and bright, colourful graphics, along with no advertising, this proved to be a game that my little one played with happily for a few minutes and would come back to - which at that age is about as much as you can really expect.  She would probably have enjoyed it more but my Android's screen is small (and cracked - need to get it fixed but that's pretty expensive :-/).


Don't forget you can also keep up to date by adding the Indie Game News Google+ page to your circles.