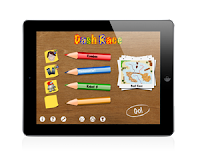 Rauenberg, Germany - Indie developer Rombos created a free version of its awesome strategy racing game Dash Race 3.7.1. The free version comprises all the great features of the full version, including multiplayer races via Gamecenter, WiFi or Bluetooth, all the leaderboards and achievements, plus the  different game modes and most of the varied racetracks that make the full version so much fun. The full and the free versions are fully compatible and can play together for multiplayer racing, and share all Game Center entities.

About Dash Race:
Up to 4 players make their moves in turn, following a very simple set of rules based on a classic and popular paper and pencil game; Dash Race takes this entertaining concept to a whole new level, and excels in creating a competitive challenge with amazing realistic driving behavior allowing you to take curves at crazy speeds, requiring courage, experience and dexterity!

But not only will you simply drive along the track and compete with friends or computer controlled opponents like formerly with the old-school pattern. Dash Race tops this concept by adding a crazy point system that will additionally award scratch-driving, mean blocking, risky speeding or cool curves and much more. Did you ever get extra points for a maneuver known as "square dance"?

Dash Race is also hilarious fun as a multi-player game. Play with your friends on one device, connect locally with them via Bluetooth or WiFi, invite your Game Center friends or challenge strangers around the world. Mix these options as you like and have a race with a friend on the other side of the table and on the other side of the world at the same time. A lot of achievements and various leaderboards complete Dash Race's comprehensive Game Center integration. Of course you can also post your victories by the built-in Twitter and Facebook support.

Pricing and Availability:
Dash Race 3.1.7 is free and available right now worldwide exclusively through the App Store in the Games category.

Download Dash Race from iTunes
Located in Rauenberg, Germany, Rombos is an indie developer for original games and fine tools.