Vienna, Austria - Indie developer Mathias Tauber today is pleased to introduce Alchemist Puzzle - 5th Element for iOS, his new game app that features 66 challenging, handcrafted puzzle levels. The goal of the game is to completely clear the game board of all stones. In order to achieve this, players move stones around by tapping, dragging, and holding them. When at least 3 stones of the same color and design touch each other, they disappear. For combinations of 4 or more stones players get bonus points and "arcane power" they can use to destroy blocker stones. 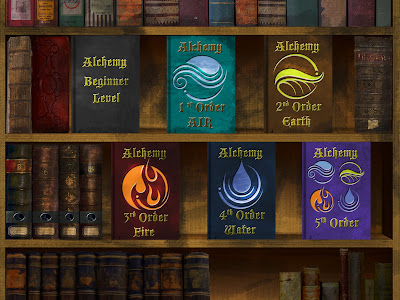 The tutorial that the player must complete before beginning the higher levels offers clear explanations of gameplay, outlining all of the game's features step-by-step. After players complete each beginner level, they move onto the next, more difficult level until they make it to the first set of level books. The five books consist of the four elements: Air, Earth, Fire, Water, as well as an elusive 5th Element that players attempt to unlock with their puzzle solutions.

In each puzzle, players must align blocks that are identical in design and color. Once at least three of the same blocks are touching, the blocks will disappear. The goal is to make as many blocks as possible disappear. A board with all blocks completely cleared will garner the player a higher score and more stars in the final rating, which is a scale from one to three possible stars. A running point score is available at the top of the screen throughout each puzzle.

For combinations that players make with more than three blocks, they receive arcane power. A bar at the top of the screen fills when players receive more power as they complete higher scoring combinations throughout the game. Players can use this power to destroy blocker stones. These blocker stones are blocks that are immovable and make solving the puzzle more difficult. One charge of arcane power will destroy one blocker stone.

Alchemist Puzzle features simple touch controls. Players simply tap their finger on the block they want to move and drag it along the screen to solve the puzzle. The blocks are colorful with enigmatic designs that add to the mysterious appeal of the game. Enchanting background music keeps players engaged in the game as they search for the solutions and eventually the elusive 5th Element.

The game can be played through the Game Center so players can view their achievements and compete with friends and other devoted players on the Leader Board.

"Alchemist Puzzle is a great game for players looking for a fun challenge," says developer Mathias Tauber. "See if you can unlock the mysteries of the elements and achieve what no other could with these stimulating puzzles!"

Pricing and Availability:
Alchemist Puzzle - 5th Element 1.0 is $2.99 (USD) and available worldwide exclusively through the App Store in the Games category.

Based in Vienna, Austria, indie Developer Mathias Tauber works at a private Austrian TV station, and creates iOS apps as a hobby during free time. He tries to create apps that he, himself, would like to use.

Don't forget you can also keep up to date by adding the Indie Game News Google+ page to your circles.
Labels: ipad, new release, puzzle