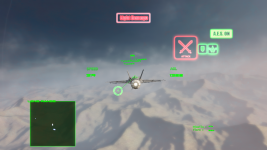 Phuket, Thailand, 20th November, 2012 – GameCrafterTeam released its highly anticipated next installment to the HyperSonic series of games – HyperSonic 4. It is now available for Windows systems from Desura.com. “Our latest offering of the HyperSonic series of games is bound to get your adrenalin pumping!” said the team leader. After many enhancements and bug fixes, the Demo version of this game was released on 13th November, 2012 and received positive feedback from gamers. Moreover, the full version of HyperSonic 4 is being offered at a 60% discount on Desura, which means that early birds can buy this game at only $4 till the end of November.

HyperSonic 4 is an action-packed, high speed shooting game replete with lots of missiles and explosions. This game provides both engaging single-player campaigns and exciting multi-player battles. In this intensely story-driven game, the player takes on the role of high tech fighter jet pilot. “There are 8 missions to complete in the single-player mode and 5 stages to fight out in the multiplayer team deathmatch mode”, said the team's leader. No matter which mission players choose, there are plenty of different types of targets to shoot like bombers, tanks, fleets of ships, fighters, etc.

Although the full final version game is available for sale online, its developers are encouraging gamers to try the demo version first so that they can check out the stunning visuals and appealing game plays for themselves. It has received enthusiastic initial response from gamers with the demo version being one of the most popular games on ModDB.

Independent game developer - GameCrafterTeam, has been creating exciting games since it was founded on 6th January, 2006. Their games are downloaded and played worldwide and have also won them prestigious awards. HyperSonic 3 / Battlefield Legends won 3rd place in the National Software Contest (of Thailand) 2011, 2012 and HyperSonic series is the legend of Thai game industry.

Don't forget you can also keep up to date by adding the Indie Game News Google+ page to your circles.
Labels: arcade, new release, pc, shoot-em-up