5 Exciting Ball Games in One - Throw Em Balls for iOS

5 sports and 5 levels are a part of Throw Em Balls. Your favourite sport is likely to be included so you have maximum fun. To unlock new levels, you need to achieve a set number of points. Every individual sport game feels extremely realistic due to the powerful physics engine and the amazing graphics. Game Center is integrated right inside Throw Em Balls so you can share and post your high scores to a global leader board. 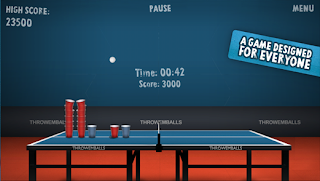 Throw Em Balls includes the most realistic physics based game engine that makes each of the 5 ball games extremely eventful. Achievements can be unlocked if you are able to gain significant number of points. Basketball, Tennis, Football, Golf, Ping Pong are the five exciting sports available.

Pricing and Availability:
Throw Em Balls retails on the Apple App Store for a price of just $0.99 (equivalent in different currencies) in the Games category. Promo codes are available on request for review purpose.


Throw Em Balls for iOS comes from an indie development group who is extremely passionate about creating Apps that deliver stunning fun gameplay along with incredible graphics. The team includes Dean Wronowski and Nico Anton at the helm of the indie development studio.