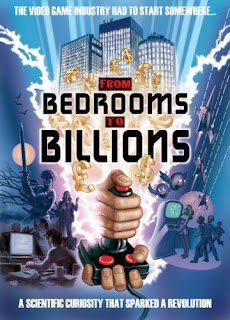 Filmmakers Anthony Caulfield & Nicola Caulfield have announced they have launched an Indiegogo campaign to fund the production of their new 90 minute documentary feature film titled ‘From Bedrooms to Billions’. The film tells the remarkable, true story of the British Video Games Industry between 1979 - 1996 and how the creativity and vision of a relatively small number of individuals allowed the UK to play a key, pioneering role in the shaping of the billion dollar video games industry which today, dominates the modern world’s entertainment landscape. Featuring interviews with key contributors to the UK story in video game development, publishing and journalism from over the last 40 years, combined with compelling archive, ‘From Bedrooms to Billions’ is the first to attempt to bring this fascinating story together starting in the late 70's, spanning 'Thatcher's Britain' of the 80's and culminating in the dramatic shift of fortunes for the UK Video Games Industry by the late 90's. The film celebrates the importance of this era and why it has become such a landmark period in the history of British invention, creativity and industry.

Producer, Anthony Caulfield said “From Bedrooms to Billions has been a very personal project for us since June 2008. Having completed many documentaries we have always wanted to document the rise of the British video games industry and the incredible story that went with it. What’s so fascinating is how the UK computer scene was originally nothing more than a scientific curiosity which snowballed into something so vast. As we started putting this film together we uncovered so many incredible stories, these people had to literally make up an industry as they went, some were very successful, but others were not so, however collectively we felt it a strong story that’s long overdue and should make a wonderful movie”. Fellow Producer Nicola Caulfield said “This film will be a great piece of nostalgic entertainment that documents an important part of UK history. This era is so often overlooked and not known by young British talent looking to enter the games industry, as the vast majority of UK children, school leavers and even students believe that gaming originated mainly from the US and Japan and have little to no knowledge that a British games industry even once existed”.
A teaser trailer as well as further information on the ‘From Bedrooms to Billions’ Indiegogo campaign can be found at http://igg.me/p/78873?a=497112

You can also visit the film’s official website www.frombedroomstobillions.com or by emailing Anthony Caulfield at

About the filmmakers
Nicola Caulfield & Anthony Caulfield
Nicola and Anthony began their careers by making film shorts, ‘The Majestic Side’ and ‘Night of your Life’ which won high praise at the 1997 BAFTA Short Film Competition, before going on to make the comedy sketch show ‘Hals Hangover’ in 1999.
They were commissioned by the government of Macau to produce a film on the East Asian Games and have also worked with the rock group‘Pink Floyd’ to produce a theatrical version of ‘Pink Floyd's – Pulse’ which was distributed worldwide.
Nicola and Anthony have also written, produced and directed various acclaimed documentaries for both broadcast and commercial release, including ‘The Story of The Young Ones’, ‘Alternative Rebellion: The beginning of Britain’s Alternative Comedy Scene’, ‘Doctor Who - Stripped for Action’ for the BBC, as well as ‘George Michael – FAITH’ and ‘Jeff’s Wayne’s The War of the Worlds’ for Sony Music. They have made two documentaries on gypsy punk group ‘Gogol Bordello’ for Channel 4 and produced the celebrated HD world music TV series ‘Soundcheck at Momo’s’.
2010 saw the release of their first feature film, ‘Immodesty Blaize – Burlesque Undressed’, which had a worldwide theatrical release and then later on DVD and terrestrial broadcast.
In addition to this work they have always had a real passion to produce films that document the video games industry. Some of their work has included short documentary films on legendary 80’s CRASH & ZZAP!64 video game magazine publishers Newsfield Publications (The Newsfield Years), Sandy White - Ant Attack and Virtua Tennis as well as recently completing the official Sonic the Hedgehog 20th Anniversary documentary titled ‘Sonic - The Birth of an Icon’ which was broadcast all over the world.

Don't forget you can also keep up to date by adding the Indie Game News Google+ page to your circles.
Labels: announcements