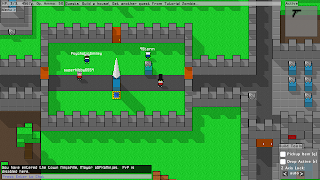 SEATTLE, WA – May 30, 2012 – Archive Entertainment is excited to announce the immediate availability of the 'S8' update for 8BitMMO, available for free to all players. 8BitMMO is a construction sandbox game where players can build houses, castles, even entire cities in a retro-style massively multiplayer world. This new update adds several features:
The update additionally includes a new weapon, whisper support, additional anti-grief protections, basic inventory sell-back support, and performance improvements.

Since the initial public announcement of 8BitMMO less than three months ago, over 30,000 players have registered to play the game. "The response has been phenomenal," said the game's solo developer Robby Zinchak of Archive Entertainment. "Players are constructing amazing creations in the game. I am consistently impressed with their ingenuity."

The game's website features a section where players may submit and vote on ideas. "The community can participate as part of the game's development," said Zinchak. "In fact, many of the new features in the s8 update were inspired from the top voted player suggestions."

Players can play the game for free at http://8BitMMO.net


About 8BitMMO:
8BitMMO is a free online videogame where players can shape the world block by block. The game's engine allows for a wide variety of player made buildings.  Players can build solo, or group up and create their own towns with friends for cooperative building projects.  In either case, a grief protection system protects the player's creations from unwanted interference. The game is humorous in tone, with amusing quests and unusual enemies.  There is also basic Player vs Player and Player vs Environment combat. While the game is still currently in ongoing development, it is fully playable on the project's website. As the project is Java based, it can be easily run on Windows, Mac, and Linux operating systems. Additional updates to the game are planned to introduce more features and content.

About Archive Entertainment:
Archive Entertainment is a one-man indie developer, Robby Zinchak. Previously a Producer at Microsoft, he has also led game creation at Capcom and Midway, producing titles such as Final Fight: Double Impact, and FLOCK!. He is now working full time on 8BitMMO from his home in Seattle. Robby has a long history with games: he wrote his first one 17 years ago on a cutting edge 16-color PC. Since then, he has continued to create games while retaining that same pioneering spirit.