San Francisco, California - Loqheart, a two-man game studio, is testing whether the combination of a genius programmer and a  rocket scientist can make a blockbuster mobile game. Their first mobile game, Cannon Cat, is a cute 2-D action-adventure game that follows a heroic cat flying through the sky from cannon to cannon, whose mission is to save all the flying fish from an Evil Emu. This epic story, easy one-tap gameplay, and 80+ levels are available now for free on the App Store for all iOS devices. 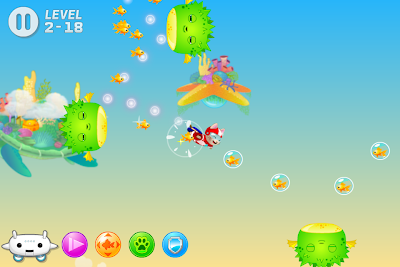 So why did this unlikely duo get together to make mobile games in the first place? When asked, David said, "I left rocket science surprisingly because it was too boring and lacked the creativity and innovation I got into engineering to pursue. Mobile games is much more exciting and allows me to explore far more parts of my brain."

It was at a Facebook game startup, that David met Don, a seasoned game developer, where they immediately connected on their passion for creating games. They soon quit their jobs and formed Loqheart, to create their own mobile games.

But you can tell from their first game, Cannon Cat, their science backgrounds haven't left them completely. Peppered with flying robots, portals, floating islands, and air cannons, Cannon Cat's world is clearly born from the minds of technology and science-fiction enthusiasts. And yet this game has all the cuteness and casual fun that will appeal to any fan of Angry Birds or Tiny Wings. With only one-tap to launch the cat, timing is everything in this game. It starts off easy enough but gets challenging for even a seasoned gamer.

When asked what inspired this wacky world of Cannon Cat, Don jokingly replied, "We actually created Cannon Cat in one week. The prototype at least. It was just a cat with a blue cape flying from one cannon to the next. People loved it. And from this simple prototype we crafted an entire world around it."  David added, "And we wanted to surprise and break people's expectations. That's why in our world, fish can fly, islands float in mid-air, and cats save fish instead of eating them."

Games after all are a place where the impossible can happen and people can feel free to take risks. And it's no wonder a rocket scientist and game designer got together to take the ultimate risk, making it big with a cute little mobile game.
Device Requirements:* iPhone, iPod touch, and iPad * Requires iOS 4.3.0 or later * 17.5 MB Pricing and Availability:Cannon Cat 1.0.3 is Free and available worldwide exclusively through the App Store in the Games category.