Derby, United Kingdom - Hyperion Games (Paul Fowler) is thrilled to announce hislatest (oldest!) action game, "Retro Jump : 1983" for iPhone, iPod Touch and iPad. Games back in 1983 used to look this way. Now three decades on and with the platform game concept evolved, this retrospective looks at how games used to be, by mixing a modern game play style with an old audio visual style.


Objective:
Keep jumping on platforms, as high as you can, tilt your device to guide the player. But watch out for the video nasty hazards, toxic weed, strange guardians, falling stalactites.

Styling:
In 1983 on a home computer called a ZX Spectrum 48k, which you had to connect to your television and cassette tape player. Yes its true, none of this 64GigaByte flash storage, games loaded from tape, taking several minutes, and screeched!. With this in mind I have recreated a noisy loading sequence. All of the graphics have been crafted to look blocky – low res, and using a limited colour palette (of the era).

The impact of Manic Miner on the British Computer Game Industry:
In the summer 1983, Matthew Smith (age 17) created a breakthrough game for the era called Manic Miner. This was an inflection point in the British computer game industry. One person, (in his bedroom) revolutionised the quality of games adding an in game sound track and iconic graphics, it stood apart from games at that time.

"I have used a similar visual style, and sounds in this retrospective, and hope you enjoy it. Ironically I have used Garage Band on the iPad to create the soundtrack; it is difficult to make ‘In the Hall of the Mountain King’ sound this ‘retro-bad’ on such a great Application. If I could contact Matthew, we could discuss using the actual graphics and sound – that would be cool. Matthew and Manic Miner inspired me at the age of 12 to start leaning to program Z80 based home computers such as ZX Spectrum, Amstrad CPC, MSX, Tatung Einstein, and 4 years later I released my first titles."

Retro Jump: 1983 is fully integrated with Apple's Game Center Leaderboard for the competitive player. Fans of Doodle Jump will be familiar with the game play dynamics, but with many additional hazards from the 'old skool' of gaming, this makes a challenging game. 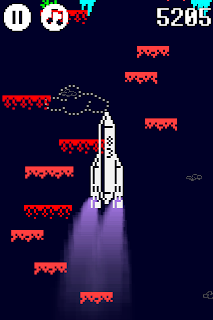 Pricing and Availability:
Retro Jump : 1983 version 1.0 is currently free for a limited time only. Available exclusively through the Apple App Store within the Games category. Enjoy this game for what it is – Nostalgia in Retrospect!


Hyperion Games is an independent mobile game development company based in Derby, United Kingdom. Hyperion Games was founded in 1986 by Paul Fowler, in the days of 8-bit home computers, such as Z80 based Amstrad, Sinclair Spectrum, Tatung Einsten, and others. Inspired to start 'bedroom coding' as a teenager by the inspirational 'Manic Miner game on the ZX Spectrum. In more recent times (2010), Paul has moved back into game development, as a hobby on the iOS platform. Paul has been in the commercial software development industry for 25 years, and is a full time Enterprise Architect for his day job.
This is Paul's ninth game on the iPhone platform.