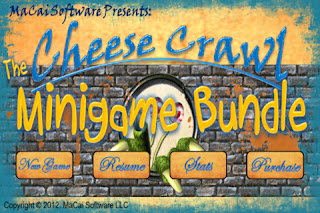 Austin, Texas - MaCai Software, indie game studio, is proud to announce the release of "Cheese Crawl - The Minigame Bundle". This release is intended to be a companion to the RPG Adventure "Cheese Crawl" released earlier this month. The Minigame Bundle is a free download that contains a series of five mini-games from the larger adventure. Just as in Cheese Crawl, players can engage in combat with genetically enhanced dairy products. In addition, players have access to four other fun and challenging activities: "Explosion!", "Towers of Cheese", "Spider Smoosh", and "Memory Lock". The Minigame Bundle allows players to experience the universe of Cheese Crawl and acquaint themselves with some of the challenges they will face playing the full adventure

"This was a serendipitous release for us," said MaCai CEO, Alan Lipton. "Early users suggested that they enjoyed some of the Cheese Crawl mini-games outside the context of the adventure. The Minigame Bundle is a way to provide our customers with that simplified experience." 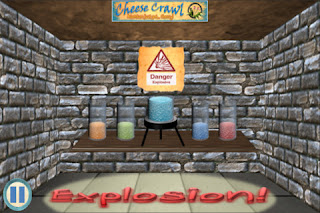 Requirements:
* Compatible with iPhone, iPod touch, and iPad.
* Requires iOS 3.1 or later
* Recommended for devices with at least 256MB of RAM