Fat Man. Little Boy. And now Blocker. What do they all have in common? They were created by the world’s leading masterminds.

April 2nd 2012, Copenhagen, Denmark. Danish game developers, InventorsOf, are proud to announce the release of Blocker, a sleek turn-based board game for the iPad, iPhone and iPod Touch based on entirely original game mechanics … Or is it?
Blocker plays and feels like a classic board game for 2 players. It is a game about maintaining your analytical overview to foresee cascading outcomes as new blocks are pushed onto the playing field. But more importantly, it is a game made by masterminds – for masterminds. 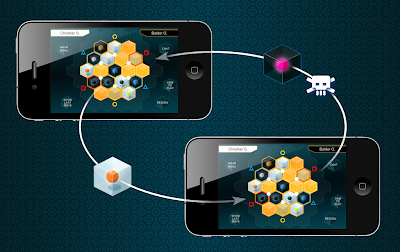 “This is actually a game that is close to 75 years old. It was conceived during the World War II at the Los Alamos scientific lab in the New Mexico desert”, explains Game Developer Balder Olrik.
It’s known that the scientists at Los Alamos played their home-brewed games while waiting for the results of their experiments during The Manhattan Project. Sadly, the end result of that project brings back memories of giant shroom shaped clouds of death and destruction: the atomic bomb.
However, many ingenious inventions came to life at Los Alamos, and not all of them were weapons of mass destruction. Blocker could be considered to be one of the more positive outcomes of the gathering of masterminds.
“The idea for creating an iOS version of Blocker came when I read the Nobel Prize winner Richard Feynman’s highly entertaining ‘Surely you’re joking, Mr. Feynman!’. It brought back memories of a very simple yet strategic game that one of my father’s colleagues showed me when I was a kid. At the time, they were both working at the Danish Space Institute and had American scientist as coworkers.
Not much was known about the game scientists like Von Neumann and Feynman played at Los Alamos - only brief descriptions and notes. At InventorsOf, I finally had the chance to reconstruct it, and after some trial an error we succeeded recreating the amazing gameplay”, Balder Olrik explains.
In Blocker you’re forced to find new ways of winning every time. Drawing comparisons won’t be enough to explain the game, but it tastes a little like ‘Backgammon’ mixed with ‘Chess’. Something that plays like a classic, but feels like a revelation. A board game you play with friends on the go. And something that is definitely challenging.
“Knowing Richard Feynman’s playful and imaginative mind it wouldn’t be a surprise if he or his friend Von Neumann, who invented the first chess computer, was the father of Blocker, but that is only speculation. I just hope we recreated it as close to the original as possible, and would love to hear from scientists or relatives of scientists if they have further information about the games origin”, Balder Olrik states.
Blocker is available now on the Apple App Store for iPhone, iPad and iPod Touch. Download it HERE.
Don't forget you can also keep up to date by adding the Indie Game News Google+ page to your circles.
Labels: ipad, iphone, ipod touch, new release, puzzle