Ensemble is a Real-Time Strategy much like the classics of the 90s (Age of Empires, Starcraft) but on a breathtakingly vast map and in a persistent world. You play as a hero exploring an uncharted desert, battling nature (and other player settlers), uncovering and gathering various resources, and discovering new territory to build towns and outposts in. You can build farms and mills to harvest food and defensive towers to protect your land, but one of the most interesting features is being able to ally with other players and work together to build these towns. 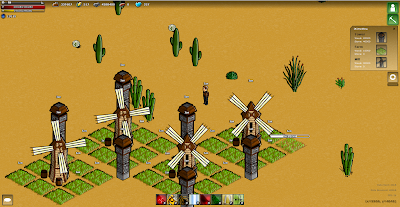 It's currently at the alpha stage of development and has a Kickstarter campaign running - lots of bonus items etc for use in-game for those who contribute to funding the game.  (23 days to go as of this post.)

Some more information about the game:


"Remember those golden games of the 80s and 90s? Mario, Zelda.... Battle Toads. We're bringing that style from your retro console into the browser and dragging along the tradition of simplicity those games perfected. To complement that, Ensemble is browser-based, making it extremely accessible. Linux, Mac, PC, and hundreds of millions of tablets and smartphones can play without downloading a bulky client."

"Ensemble Online is the world's first true MMORTS. What we mean by that is it's the first game which allows you to tactically control territory, harvest resources, and build buildings anywhere on an expansive, real-time, never-ending map. No limiting where you build, no text-based battles, no losing your progress when you log off (you better build some towers, bro, or your town will be gone by morning). This is RTS in the MMO-iest sense of the acronym.

We've managed to keep a lot of the simplicity that allowed classic games to be enjoyed by everyone while still allowing you to do all the things you'd want to do in an RTS".


Don't forget you can also keep up to date by adding the Indie Game News Google+ page to your circles.
Labels: announcements, linux, mac, pc