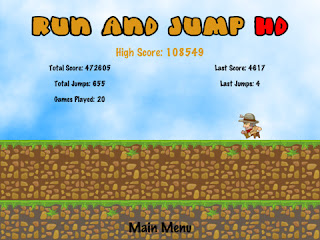 Pensacola, Florida - Byte By Byte today is pleased to announce the release of Run And Jump HD. A side scrolling endless runner genre game. Run And Jump HD is $1.99 on the iPad. Run and Jump HD is the follow on iPad version of the successful iPhone game "Run and Jump". Now enjoy the great game play on the iPad and for those iPad 3rd generation owners you get to see the game stunning Retina detail.
Simple Controls:
Run and Jump HD has a minimal control interface requiring only the attention of the player and the tapping of the screen. No complicated interfaces here. Start the game up and enjoy some simple addictive game play. 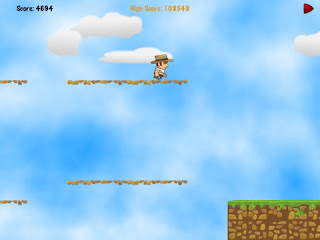 Challenging Varied Content:
Tired of jumping from one green box to the next or running along the same platform for what seems like forever? Run And Jump HD includes 6 maps to run though which get repeated in an endless but not boring exploration of running and jumping. Be warned the further you run the faster you run. The title may be Run And Jump HD but their comes a time when jumping may mean jumping to Game Over.
Select A Runner That Fits Who You Are:
The game has 5 different runners that can be selected. Each runner has their own suspenseful and dramatic background music to run too.
Game Center: 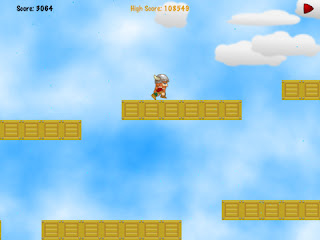 Keep track of how you are doing both on device and on Game Center. Who will have the highest single game score? Who has best total score? Who is the most addicted to the game? Check Game Center and find out. Game Center not accessible? No worries, Run And Jump HD tracks all the same Game Center data locally as well a few other items.
Quality Content:
Run And Jump HD includes sprite art by Chris Hildenbran and background music by Kevin MacLeod. The background music is both awesome and suspenseful. The quality of the game elements are far more enjoyable than stick figures and green boxes. Retina support for the new iPad is included.
Device Requirements:
* Compatible with iPad
* Requires iOS 5.1 or later
* 19.3 MB
Pricing and Availability:
Run and Jump HD 1.0 is $1.99 and available worldwide exclusively through the App Store in the Games category.


Florida based Byte By Byte is a husband and wife venture to bring fun and useful Apps to the iOS platform. Founded in 2010 and having released 15 iOS application the company looks to a bright future and continued iOS development


Don't forget you can also keep up to date by adding the Indie Game News Google+ page to your circles.
Labels: ipad, new release, platformer