Have you ever played a game like Fire Emblem or FF Tactics and thought "Man, this is awesome, but I really want to play this against my friends right here in the comfort of my own home?" Well, now you can! Telepath Tactics is a multiplayer turn-based tactics game set in the Telepath RPG universe* that seeks to bring the Super Smash Brothers experience to turn-based tactics. Supporting up to 6 players in hotseat mode, you can comfortably invite friends over, open up some beers, build some armies, and commence the tactical butt-kicking. (You can also play over the internet; beers optional.)

Telepath Tactics features a gorgeous new art style, a totally redesigned UI, and a brand new combat engine that both expands upon and deepens what players saw in Telepath RPG: Servants of God. Matches feature elevation effects, status effects, random item drops, multiple play modes, and multiple elemental strengths and weaknesses for each of the game's 22 unique unit classes.  (The screenshot below is from a very early pre-alpha build.) 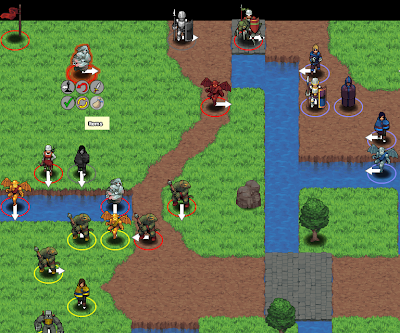 Telepath Tactics is planned for release on PC, Mac and Linux by the end of 2012, and possibly being ported to iOS and Android later on.


Don't forget you can also keep up to date by adding the Indie Game News Google+ page to your circles.
Labels: announcements, linux, mac, pc, strategy