Tel Aviv, Israel - On The Mob and Tarnegol Games, leading publishers of internationally acclaimed mobile apps, have united to announce the latest update of their hit social card-game, Yaniv on iPhone and iPod touch. Legends swirl around the origin of the game: some say that Yaniv was invented in the depths of an Israeli prisoner camp, while others claim that it was spread by two adventuresome backpackers named Yaniv and Assaf as they journeyed the globe. Yaniv skillfully combines the greatest components of card-games such as Rummy, Razz and many more with a few of its own unique elements to create a simple to play, yet remarkably engrossing experience that all card players are guaranteed to enjoy.

Yaniv, which first became popular as a physical card-game before launching on mobile and reaching the top of App Store charts across the globe, challenges players to reduce their hand value by cleverly discarding single cards, sets and series. When a player believes that they hold the lowest valued hand, meaning 7 points or less, they simply shout "YANIV!" to end the round. Players beware, if "YANIV" is declared and another user has a lower hand, "ASSAF" is called and 30 points are added to the "YANIV" shouter's score. The first person to reach 200 points is removed from the game. Outwit the competition and follow each move closely to defeat players from around the globe!

"In the last decade, Yaniv has rapidly become one of the most popular card games for Israelis, both at home and as they travel abroad. However, its mobile adaptation has pushed the game to new heights of global virality," said Tarnegol Games representative Yonatan Zvik. "This simple card-game, with its mysterious origins, has resonated with an international audience. Players from Norway to the Fiji Islands have spent hours entertained by Yaniv, and we're proud to finally bring the excitement of this notorious crowd-pleaser to the United States." 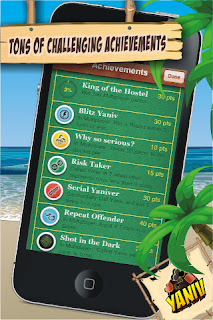 * An easy to follow, Step-by-Step tutorial introduces new players to the game
* Play offline against challenging computer opponents or online with players around the world
* Invite your friends and challenge up to 3 players at once
* Quick Match feature lets you jump right into multiplayer action
* Share your score via Facebook
* Chat with friends and connect with leaderboard support for online matches
* Earn 40 fun and exciting achievements
* Access player profiles by tapping on a player's name in an online match
* Additional difficulty levels, game statistics, and modes are available
* Full retina display support with vibrant and colorful art
* 3 Difficulty levels (Pro difficulty for Pro users only) & fully customizable game settings

About OnTheMob:
OnTheMob is a global full service mobile marketing agency specializing in App Marketing, Mobile advertising and Mobile Media. The company specialty is taken a great app and makes it successful by creating a cross platform marketing strategy. Since established at 2010, OnTheMob's portfolio includes dozens of brands worldwide from all sectors: Commercial, Finance, Automobile and many more. OnTheMob is part owner in Yaniv app. The company is a part of the Fishman Group, one of Israel's lading and most renowned private investment groups.

Pricing and Availability:
Yaniv 1.1.2 is Free and available worldwide exclusively through the App Store in the Games category.