Swordigo By Touch Foo Combines Platforming And An Adventure RPG

Jyvaskyla, Finland - Touch Foo, the developer of the highly acclaimed platforming game Soosiz, today is proud to announce the immediate release of their latest iOS title, Swordigo 1.0.1. Combining a fast-paced platformer with elements of role-playing games, Swordigo sends players on an epic journey to run, jump and fight their ways through a vast world in a quest to defeat the spreading corruption. 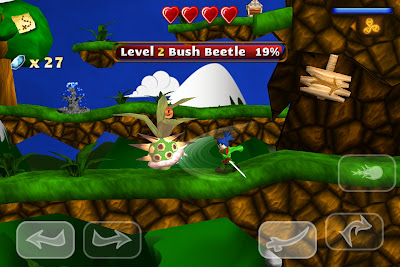 Unlike most other platforming games, there are no separate levels in Swordigo. Instead, there is one big world to explore, which creates a great feeling of discovery. To advance in the game one must actually travel to the new location inside the game instead of choosing a level in a level selection screen. On top of this, the players will use swords and magic spells to fight off vicious enemies and to gain experience to level up their characters.

Swordigo Features:
* Hours of fun adventure and exploration through a vast world
* Gain experience and level up your character
* A selection of powerful weapons, items and spells to find
* Dynamic lighting system to illuminate gloomy caves and dungeons
* Customizable touch controls designed specifically for iOS
* Game Center and Openfeint Achievements
* Use iCloud to sync saves between the iPhone, iPod touch and iPad

Pricing and Availability:
Swordigo is $1.99 USD (or the equivalent amount in other currencies) and is available worldwide on the iPhone and iPad App Stores as an Universal app.