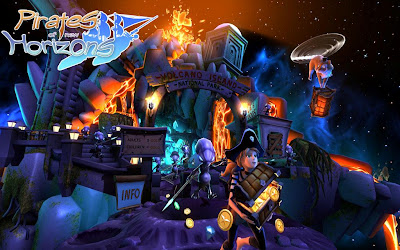 February 29th 2012, Hamburg, Germany. Indie games studio Exit Strategy Entertainment is inviting you to check out the preview version of their swashbucklin’ Action Adventure/Platformer, “Pirates of New Horizons”. This preview version contains the first two levels from the final game – The Meteor Crashsite and Hubington. The preview can be played directly in your browser, for free. In the spirit of crowdfunding, players are also able to pre-order the full game, thereby directly supporting the developers efforts to make the game better and get it out the door sooner, while enjoying some special perks that come with purchasing early.
Pirates of New Horizons is the 3D love child of two classic genres: Jump'n Run and Action Adventures. The game is set in an original universe of pirates and science-fiction. Players follow the pirate girl “Annha” - a courageous young lady with kleptomaniac tendencies whose only dream is to become one thing: filthy rich. They will need to use their spaced out inventory of gadgets and acrobatic skills to loot the hovering islands of "New Horizons" and solve the mysteries of a universe that has come apart at the seams.

The game will be released first for PC and MAC, but XBLA and PSN versions might follow, so stay tuned!
Preview Version details
Besides the 2 preview levels available at www.piratesofnewhorizons.com, gamers who pre-order the Buccaneer Edition at a discounted price of €14,99(/~$19,85), will gain instant access to the first dungeon of the game (Volcano Island), more gadgets, a downloadable version and early access to future content.
The Captain Edition ships at a pre-order price of € 24,99(/~$33,00) and comes with special perks such as access to the Pirates of New Horizons themed puzzle title “Planet Buster”, as well as access to the game’s original soundtrack. Additionally, Exit Strategy Entertainment will print and feature a photo (or avatar) of your choice in their ‘Hall of Captains’. It’s their way of showing appreciation to those who go the extra-mile in supporting them.

For more information, access: http://exitstrategyentertainment.com/piratesofnewhorizons/hallofcaptains.php
About the developers
Exit Strategy Entertainment is a young development studio consisting of four developers from Scandinavia and Germany, who have previously worked on titles such as Crysis and the Kane & Lynch series.


Don't forget you can also keep up to date by adding the Indie Game News Google+ page to your circles.
Labels: mac, pc, platformer, preview, rpg