Still anxiously awaiting the release of Gateways?  Well now you can finally try the game yourself as the Windows demo is available on the Smudged Cat Games website:
http://www.smudgedcat.com/gateways.htm
Master the standard and resizing gateway guns in this demo that lets you play through the beginning stages of the game.  Ideal preparation for the game’s full release on Windows and XBox LIVE Indie Games on the 22nd of June.
If you like what you see then you can pre-order the full game now for just $10 from the Smudged Cat website so that you’ll be sure to get it whenever it’s released.  If you’re feeling more generous then you can support your local friendly game developer with the $30 deluxe package.  If you do you’ll be rewarded with some promotional goodies in time for the game’s release,... a Gateways mouse mat, signed A2 poster of the map and a Smudged Cat Games pen! 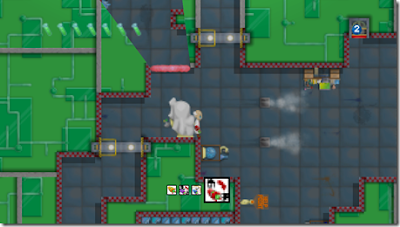 Due for release on the 22nd of June, Gateways is a 2D platform game set in the lab of an inventor called Ed following an outbreak of a number of his more "creative" experiments. Can you help him escape the lab?
Alongside the traditional platform elements such as jumping on enemies heads, spikes and moving platforms are the gateway guns. The gateway guns allow you to place two gateways on the walls, floors and ceilings of the lab so that when you pass through one you emerge out of the other. As progress is made through the game different types of gateway gun are introduced with different effects. After the basic gun, you acquire a gun that creates two gateways of different sizes, passing through one way shrinks Ed to half his size and the other way makes Ed grow to twice his size. Then you find a gun where one gateway doesn't just connect to the others location but also its time, allowing Ed to travel back in time and encounter earlier versions of himself. Finally, the last gun manipulates gravity so passing through allows Ed to walk along walls and on ceilings. 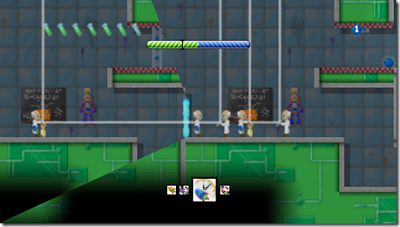 Gateways takes place on a single sprawling map rammed with puzzles and challenges. As power ups are acquired more and more of the map opens up containing more power ups and secrets. In addition to the gateway guns Ed will also find a torch letting him light up the darker areas of the map and a mirror which can be used to deflect lasers.
A sophisticated help system will help Ed along throughout the game. Every puzzle has a help point next to it where Ed can use power orbs to find out if the puzzle can be solved using his current power ups and abilities. If it can be solved and you're still stumped then spending more power orbs will provide you with the solution.
http://www.smudgedcat.com/gateways.htm 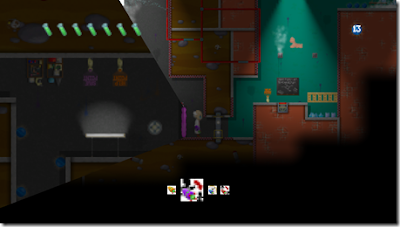 Don't forget you can also keep up to date by adding the Indie Game News Google+ page to your circles.
Labels: announcements, pc, platformer, preview, screenshots