St. Chicken is a unique and innovative game for iPhone, iPad, Mac and PC where you will play as a lost pet fish with special healing powers. The goal in St. Chicken is to spawn as many guppies as possible and deliver them to the end of each level alive. Controlling St. Chicken, players spawn, nourish and protect their school of offspring and guide them through a series of lakes and estuaries, in search of lost, sacred aquarium relics.

To spawn offspring, St. Chicken needs to eat nutrients from food in the water. Once St. Chicken eats enough food, a baby guppy is born. Throughout the game the player will spawn hundreds of offspring, and use St. Chicken to shepherd them through the perils of the wild to safety. 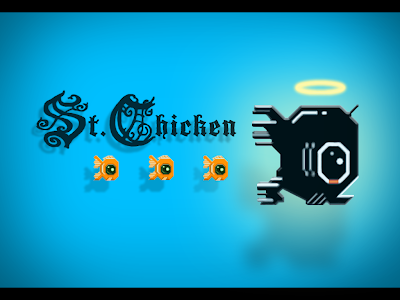 St. Chicken is in production at Fresh Aces’ videogame studio in Colorado and is targeting release this Spring.

About Marc Wilhelm
Marc Wilhelm has worked professionally in games since 1999 for some of the largest mainstream companies contributing to several AAA titles. For the bulk of his experience in games he’s worked as a designer and creative director, recently returning to his home state of Colorado to found his own indie game startup - Fresh Aces.

For more information on his experience visit:
http://www.freshaces.com/about

“I love videogames and there is much more that can be done with the art-form. Quality games don’t require elaborate, realistic 3D graphics, big budgets or brand tie-ins. As a designer, my goal is to create progressive, interactive experiences propelled by fresh themes, styles and gameplay. The current dominance of open platforms means that this really is the ‘indie age.’ We stand at a precipice where ‘me-too’ genre based games and commercial clones obscure players’ game choices on the most innovative and popular platforms. This threatens to send games back into the dark ages of popular opinion. It is the responsibility of us, ‘the crazy ones’, the indies, to remind the mainstream that the progression of the art-form has to be the focus of our efforts, otherwise games will again become just another commodity to be taken for granted.”

For more information visit the company’s website at www.freshaces.com.


Don't forget you can also keep up to date by adding the Indie Game News Google+ page to your circles.
Labels: announcements, ipad, iphone, mac, pc