March 1st 2012, Sweden. Mediocre is proud to announce that their highly successful mobile game Sprinkle, is now available for Mac. Moreover, the developers have just been announced that the title won the IMGA Best Casual Game Award! The IMGA Awards are the mobile entertainment industry’s leading showcase for groundbreaking innovations, displaying exceptional quality and new trends in mobile entertainment. This year, the competition among the nominees for the Best Casual Game section was fierce (Jetpack Joyride, CreaVures, Hector, The Blocks Cometh), but Sprinkle was the one taking home the award. 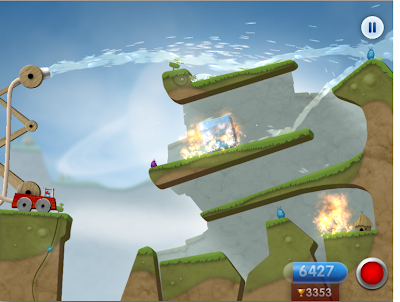 Now, you can play this highly acclaimed, award winning, wet physics puzzler with amazing gameplay from any of your Apple devices and save your progress in the iCloud. This way, you will be able to continue from the level you left off anytime, anyplace.

The inhabitants of Titan, a moon of Saturn, lived out their days peacefully in their straw hut homes – until space tourists from Earth crashed through Saturn’s rings, bringing a storm of flaming asteroids crashing down on the Titans. To combat the widespread fires threatening their homes, the Titans have built a massive water cannon.
Players must adjust the height and angle of this water cannon mounted on a crane to fight fires, move obstacles, spin wheels and activate traps in this challenging water-physics based puzzler! But squirt carefully as you will run out of water and the less water you use, the more drops you earn!

The game has amazing water physics and brain-teasing puzzles that become more and more complex during its 72 levels. Use the power of your water cannon to move blocks of ice and boulders, spin giant cogs, and depress traps in order to reach and extinguish every last fire.

Don't forget you can also keep up to date by adding the Indie Game News Google+ page to your circles.
Labels: casual, mac, new release