Merge Games are adding yet another Indie hot shot to their 2012 line up in the form of Gemini Rue, the gripping neo noir, retro point and click adventure with a huge cult following. To be released on Feb 10th, The Collector’s Edition will feature 2 extra games from the same developer (Joshua Nuernberger), a surprisingly cool soundtrack you will actually enjoy listening to (!!) and an equally cool poster. Available for £19.95 from all good retailers.


Gemini Rue Info
2229 – Gemini Sector. Former mafia killer, turned law-enforcer, Azriel Odin, is led to the rain soaked planet Barracus on a quest to rescue his brother. Before he knows it, Azriel finds himself knee-deep in trouble having to cut deals with a local crime syndicate. Meanwhile, a man by the name of Delta-6 awakens without memory in research facility at the other end of the Galaxy. It’s leader forces Delta-6 and all other inmates to take part in a series of strange tests. Any resistance leads to the repeated obliteration of their memory. Delta-6 has to find a way to escape, but who can he trust?
Gemini Rue, which was awarded with the Student Showcase Award at the Independent Games Festival Awards 2010, is striking with an uncompromising dark story by Joshua Nuernberger. Its noir-style pixel art backgrounds and atmospheric soundtrack lend it a unique charm.
Features
·         Over 60 hand-drawn backgrounds
·         A moody, film noir atmosphere
·         Control both Azriel & Delta 6
·         A Gripping Sci- mystery
·         DVD Style Commentary track
Added Value
·         Soundtrack
·         2 Extra games from developer
·         Poster

Gemini Rue, which was awarded with the Student Showcase Award at the Independent Games Festival Awards 2010, is striking with an uncompromising dark story by Joshua Nuernberger. Its noir-style pixel art backgrounds and atmospheric soundtrack lend it a unique charm. 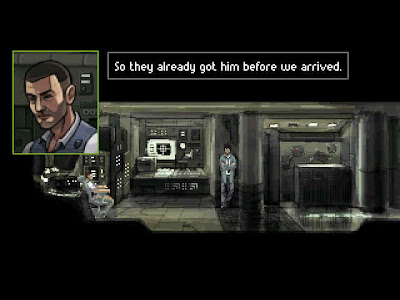 About Merge Games - Merge Games is a developer and publisher of independent games titles for the retail and digital marketplace based in England. We have a wealth of international experience, gained from working with major publishers over the last ten year with an experienced, forward thinking team of sales, marketing and creative gaming experts. Our initial success stemmed from our ability to help developers and smaller publishers get access to ‘hard to reach’ gaming markets like Russia, Middle East, Turkey, Pakistan and others.
In 2011 we opened up directly into the UK retail market and you will now find our games on shelves in Game, Morrisons and other nationwide retailers.
We continue to broaden our portfolio, now representing several indie game developers globally on PC ESD portals, such as Big Fish and Steam. We support our projects with bespoke marketing and PR plans for both the launch and the lifetime of the game. The key to our success is that we are small enough to give each project a very personal and tailored solution, from a talented, experienced and passionate team.
See also: Gemini Rue review