Kickstarter Campaign: Party of Sin (puzzle platformer in development for Xbox and PC) 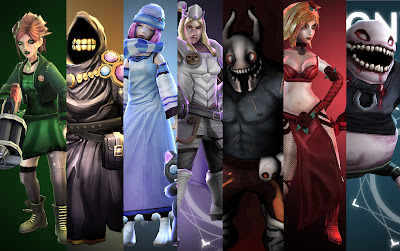 "Ever had that itching desire to tear out of the depths of hell and into the highest reaches of heaven, unleashing all of your pent up sin against demons, angels, and friends alike? Party of Sin is a coopetitive puzzle-platformer for 1-4 players on PC and Xbox 360. Eat, seduce, or sleep your way through volatile Biblical environments as one of the Seven Deadly Sins: Envy, Gluttony, Greed, Lust, Pride, Sloth, or Wrath. Collect a mini-arsenal of weapons and strategically execute your powers to damn opponents and manipulate the environment to solve puzzles. Look at the game through your own eyes instead of the designers’. Battles and puzzles are designed to be responsive and allow multiple solutions. Cooperation with fellow Sins is vital, but be on guard; in Party of Sin, alliances are tenuous. It’s the nature of a Sin to back-stab its friends for points, ammunition, and glory. Join a party of epic proportions that tests your ability to think from the other side of morality."


So, there you go - weird plot dealt with.  Check out the trailer below and visit the game's Kickstarter page.  Pledge $15 and to pre-order the game.