Half Breed 1.0 released for iOS and Android - New Action Game 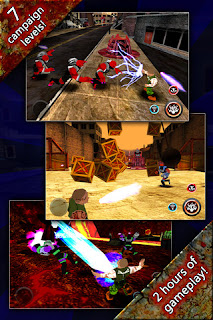 Olympia, Washington - Half Breed, a new action game app from iNoko Studios, was made live today in the iTunes and Android market. This high-intensity game takes players on a journey through challenging terrain as a soldier on a mission to exact revenge for his abduction by aliens. The game begins when the soldier, who cannot remember his name or where he is, wakes up in a lab, only to be attacked by his captors.

Charles Haggas, co-founder of appspire.me says, "We believe that this app can be very successful, we were excited to join this project after we saw the high quality of the game."

The soldier's super-powers include shooting lightening from the palm of his hand and flying, handy tricks when faced with running through a tunnel of machine gun fire. Half Breed players battle evil aliens in seven different levels, each equipped with its own backdrop of monsters. Players learn the hero's name at the end of level 4, but must complete all seven levels to exact revenge on the person/s responsible for the experiments done on him.

The app was created by an active duty soldier while serving in Iraq. Throughout his year-long deployment, Clinton Akins created the story and layout for the game a little at a time. "I funded the project by saving all of my extra combat pay," he says. After spending some time with his family and adjusting to everyday life after his return from Iraq in September of 2010, Akins was out shopping for app developers and working to get his game in the mobile app market.

Pricing and Availability:
Half Breed can be downloaded for free in the iTunes app store and Android Market with two full levels available to play. Paid in-app upgrades are available to unlock all seven levels for $1 and to unlock 10 additional powers (non-consumable) for $1. Two additional special powers (consumable) can be purchased for $1 each, allowing up to 20 uses of the weapon. iNoko Studios is committed to donating a percentage of the profits to the Wounded Warrior Project to help those that were wounded in combat overseas.


iNoko Studios is a small, independent game development company with its primary focus on iPhone, iPad, and Android games. iNoko Studios began development of Half Breed in September of 2011 and released the game in early 2012. Their mission is to create fun, high-quality games for people around the world to enjoy. We do this to raise money for charities such as the Wounded Warrior Project that help our injured servicemen & women as they return home from combat. Copyright (C) 2012 iNoko Studios. All Rights Reserved. Apple, the Apple logo, iPhone, iPod and iPad are registered trademarks of Apple Inc. in the U.S. and/or other countries.
Labels: android, ipad, iphone, ipod touch, new release, shoot-em-up