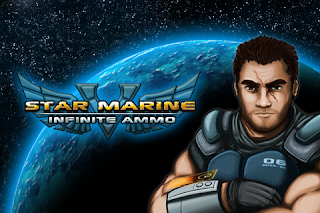 Ottawa, Canada - Developer GlitchSoft, famed and renowned for some of the most awesome and popular retro-games, including the award-winning Destructopus(TM), and the classic Bar Star(TM) are at it again! 'Star Marine: Infinite Ammo' for the Apple iPhone(R) & Apple iPod touch(R), is currently in the final stages of its development, and interested journalists are awarded an exclusive sneak-peak at this retro run n' gunner. And dude ... this game is like .. WOW!

'Star Marine: Infinite Ammo' can be defined as the definitive Run n' Gun experience. Set in the distant future and in the darkest corner of the universe, a tyrant race captures and oppresses all living creatures within their realm. One-by-one the race acquires control over all - that is, until they cross paths with one man. He goes by the name of Arc, and he is a battle hardened drifter with no set course. Untamable, unforgiving, and unstoppable, he will bring apocalypse to the evil race in a fiery charge rampant with bullets and explosions... it's safe to say they Eff'd with the wrong Star Marine!

'Star Marine: Infinite Ammo' is a side-scroller that is inspired by, and features comparable gameplay, to popular titles like Contra, Rapid Reload, and Metal Slug!. The game is completely original and designed from the ground up for iOS, and features a familiar dual stick control schematic with a single button to activate Arc's propulsion pack. The controls are extremely responsive and allow Arc to run, dash, jump, hover, hang, climb, and prone while delivering a continuous rain of bullets upon his enemies!

As a studio, GlitchSoft has always strived to develop games that push the boundaries of mobile gaming and fill the commonly overlooked micro niches of the App Store. Bar Star(TM) was the first casual time management game to feature dual protagonists, and a scrolling playable area for more drink serving mayhem! Similarly, Destructopus(TM) features a screen spanning gigantic monster and allows players to rampage on behalf the planet! In keeping with the studios tradition, 'Star Marine: Infinite Ammo' takes iOS gaming to a whole new level. 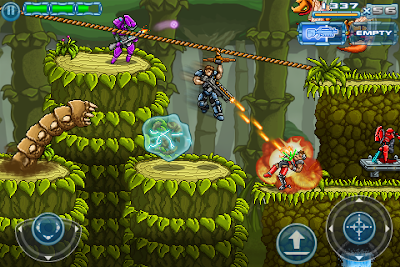