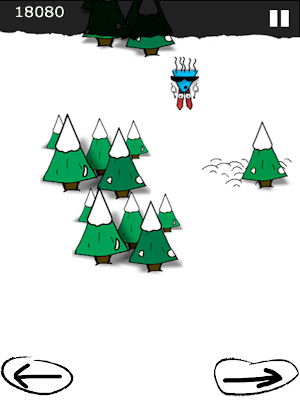 London, United Kingdom - Flaming Mitten Studios Ltd. today is pleased to announce the release and immediate availability of Doodle Ski 1.8, their new gaming title for iPad. In Doodle Ski, it is your objective to navigate the treacherous slopes of a dynamically generated environment, avoiding obstacles and angry enemy creatures. Players with the "right stuff" will also have to contend with an alien invasion at 100,000 points. Yes, you read correctly!

In this simple yet highly addicting game of balance and quick thinking, the slopes are not only plagued by fog, rockslides and avalanches, but also crammed full of enemies such as angry Yeti's and perilous Penguins! The Aliens appearing in Doodle Ski are on a visit from the developers other game, Doodle Galaxies!

Controlling your skier is simple: simply tilt the iPad in the desired direction (or choose the all new for 2011 "touch controls"), while avoiding enemies and obstacles at all costs! It will take perseverance, luck, skills, and a steady hand to master Doodle Ski. Can you tame the Angry Penguin? - Can you teach our Angry Yeti a thing or two? - Can you reach 100,000 and defeat the Alien Attack? Well theres only one way to find out... Hit The Piste!

Pricing and Availability:
Doodle Ski 1.8 is only $0.99 USD (or equivalent amount in other currencies) and available worldwide exclusively through the App Store in the Games category. Doodle Ski is also available for the iPhone and iPod touch.