Don't Run With a Plasma Sword to the App Store 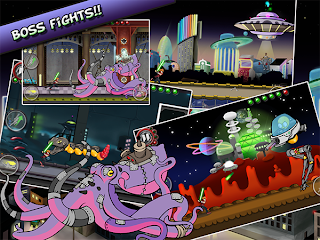 Montreal, Canada - XperimentalZ Games has announced today the release of its third and biggest title. After over a year in the making, Don't Run With a Plasma Sword is now available on the App Store as an universal app, allowing the player to run with a plasma sword and slice up invading aliens.

Don't Run With a Plasma Sword, set in a humoristic and retro-futuristic universe, pushes back the boundaries on the endless runner genre with several key features.

* First of all, it includes a story mode with checkpoints, comics and a boss battle at the end of every of the 4 levels.

* Secondly, its control buttons are contextual. The jump, slide and slash actions become double jump, dive attack, slide attack and dash attack under proper conditions. Those expanded actions allow the player to navigate through a rich and breathtaking gameplay environment, providing an impression of platformer.

* Finally, the player can accumulate XP from killing aliens, completing story mode sections or endless mode objectives. Those XP can later be used to unlock new skills or customize their character appearance.

Other features include:
* Retina Graphics
* Universal App
* 4 environments: city, factory, mother-ship and alien planet
* 4 endless levels separated by level of difficulty, from easy to expert, with objectives to accomplish
* Game Center and Openfeint support, with leaderboards and over 30 achievements
* Several types of monster and obstacles
* Original soundtrack with a total of 8 different musical themes

Pricing and Availability:
Don't Run With a Plasma Sword 1.0.8 is available worldwide through the App Store at a special launch price of $0.99 USD.

Don't Run With a Plasma Sword for iPhone:

Don't Run With a Plasma Sword for iPad:


Based around Montreal, Quebec, Canada, XperimentalZ Games Inc. is an independent video games developer dedicated to the creation of cool original games for the App Store. The enterprise was founded in 2010 by Patrick Jacob, a former scientist in mathematical physics and game designer at Gameloft who turned indie.
Labels: arcade, ipad, iphone, ipod touch, new release