Unlike the original game, Steel Storm 2 is an old-school FPS in the spirit of Doom® and Quake®. It's a spinoff in the original Steel Storm universe, with a rich story, yet not story driven gameplay. The game is being developed primarily by the founder of Kot-in-Action, Alexander "motorsep" Zubov. Steel Storm 2 will have a much simpler game logic code than the original game. The source code will be distributed with the game as a part of the modding SDK and will allow better modding capabilities.

In the game, you take on the role of Abigail Setareh, a former hovertank pilot who became a natural resource scout in pursuit of adventure. You will begin your journey in a remote corner of the Warbird galaxy, on an uninhabited planet (or so it seemed for a long time). In your journey you will discover many wonderful places, cool weapons, General Nabbatt and his robotic army of the separatist Union, and ancient aliens. Ferocious gun fights and key hunts are guaranteed. 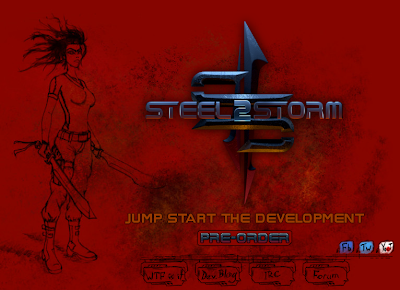 Some of the key features:    Fast flowing single-player and co-op FPS combat in the best traditions of Doom® and Quake® ;    Rich background storyline;    Monsters and enemies with various skills;    Gibs!    Key hunt and environmental puzzles;    Big and scary bosses;    Modding SDK.
The game will utilize the mighty Darkplaces engine once again and will be available for Linux, Windows and Mac. The game will be following the alpha funding model and everyone who pre-orders the game will get access to the game's very first builds and will ultimately receive the final version without any extra charge. As the development progresses, the price will go up. The starting price is $5 and the final game will cost $20. Steel Storm 2 is a must have game for the fans of the original Steel Storm. Please support the game and help it rise to it's full potential.