Slingshot Justice is going back to School 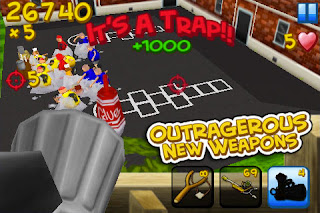 Melbourne, Australia - Anomalous Interactive brings you grave news from the neighbourhood. The holidays are over and the bully menace is back in school with an even greater thirst for mayhem. Deal slingshot branded justice once again across three all new levels and take the school back from the menacing bullies. Re-equip for the new schoolyard levels with an arsenal of new weapons including the outrageous glue bomb, which can be used to trap and humiliate your enemies while you slingshot your way to victory.


Anomalous Interactive have teamed up with OpenFeint's 'Free Game Of The Day' to celebrate our 'Back-To-School' update, by giving away the entire game for Free. This great deal starts on November 2nd and will only last for 48 hours so all our fans have the chance to uphold justice and deal out some slingshot punishment using the all new weapons and levels.

Slingshot Justice is a frenetic paced shooter, action-arcade game that requires quick aim and an unrelenting resolve. From your Tree House of Solitude deal schoolyard justice upon the bully menace with your arsenal of homemade weapons; the trusty slingshot, an ice cream scoop rifle and the powerful grenade launcher. Pack grapes, muffins, soda bombs, the all new glue bomb and many other objects into your weapons to unleash mayhem upon the bullies and serve justice for the innocent. 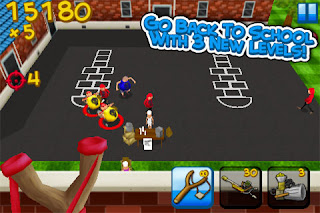 Now everybody can take up action to protect the lemonade stands of the youth from the terrors of the local bullies. War never changes, and with your trusty slingshot in hand, you'll defend innocence from brutality with your own Slingshot Justice, or get a wedgie trying! Slingshot Justice is free to download and play so check it out today!

Pricing and Availability:
For a limited time, Slingshot Justice 2.3.0 is free and available worldwide exclusively through the App Store in the Games category.

Located in Melbourne, Australia, indie game development studio Anomalous Interactive produces unique and entertaining games and projects for the smart phone market. With a mission is to produce fun and unique games that we want to play and share them with the world, the company strives to bring together the community behind video games, both the fans and the developers, with innovative games and projects. Games that you can pick up and play, games that will challenge you, games that will bring a smile to your face and games that you will find yourself addicted to.