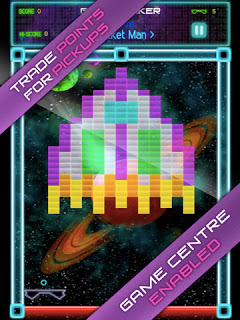 Eastbourne, United Kingdom - mMyrix Studios Ltd wishes to announce the release of their new game GridBreaker on the iPad, iPhone and iPod touch. GridBreaker is not just another bat and ball/breakout game. The game is visually and musically stimulating as well as fast and action packed with lots of exciting power ups. It pays homage to traditional breakout games but with a modern twist. Although the basic gameplay is the same as any other breakout game, there is an intriguing story that is designed to captivate the imagination of the player and that is portrayed in every aspect of the game.

GridBreaker takes you on a journey with our hero Zimmerman a soldier who has the fate of the world on his shoulders. We join our hero as he embarks on his epic mission to destroy the enemy's defenses. The aliens fight a psychological battle with its enemies, making mental images of the things most loved and treasured that have been lost and making them relive the lowest points in their lives, and the only way forward is to play their game and destroy the images.


Game Features:* Fast action arcade gameplay
* Fun & Addictive
* 11 different cool power ups /power downs
* Option to use points earned to trade for power ups including extra life after each level completed. You can power up or down depending on how you want to play

Points Structure:* Each brick is worth at least 10 points
* 4 Gems Bonus Points to be collected 1K, 2K, 5K & 10K
* Game Centre integration to show off your High Scores

It's all about the Points ... Who will be the ultimate GridBreaker?

Pricing and Availability:GridBreaker 1.0 is only $0.99 USD (or equivalent amount in other currencies) and available worldwide exclusively through the App Store in the Games category. GridBreaker HD for iPad is also available.


Located in the UK, Myrix Studios is a small indie studio with a passion for games. The company is presently making their first few games for mobile devices.
Labels: breakout, ipad, iphone, ipod touch, new release