Mazatlan, Mexico - EnsenaSoft is no newcomer to the Mac App Store, and this time the developer has unleashed a horde of angry pigs on a rampage to smash, squish and squash innocent little birdies in cute and colorful 'Raging Pigs', just released for the Apple Mac, and now available on the App Store. 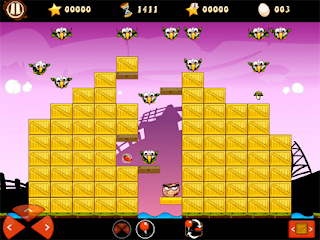 Raging Pigs can best be described as a mix of several blockbuster games from the past such as Jack Attack, Q-Bert(R), and Angry Birds(TM): mix the three, and Raging Pigs offers you an absolutely brilliant platform- and puzzle-gaming experience! Through 168 levels of pig jumping fun you can win up to 3 eggs per level, and each of those present different challenges and puzzles to solve, including the pushing and pulling of crates, platforms to activate, HOT Chili pepper powers, shooting crossbows, protective helmets, fire platforms, falling crates and the everlasting infinity level!

To supplement the release of Raging Pigs for the Apple Mac(R) the developer will also make available a FREE version of the game with limited levels, allowing anyone to have an opportunity to experience the game, prior to buying the full version. The FREE is coming out next week.

Pricing and Availability:
Raging Pigs 1.0 is $2.99 USD (or equivalent amount in other currencies) and available worldwide exclusively through the Mac App Store in the Games category.

EnsenaSoft, is a fast rising independent games developer consisting of a close-knit team of programmers, designers, artists and musicians, all striving as a team to deliver high-quality content titles on multiple platforms with focus on arcade, board, puzzle, word and educational games!
Labels: arcade, mac, new release