Cary, North Carolina - Digital Leprechaun today is pleased to introduce Martian Miner 2.0 for iPad, their new arcade Game that updates the classic Asteroids of the 1980's with touch control, hi-res graphics, and a huge number of levels, enhancements, adversaries, traps, and scoring opportunities. The player must navigate their flying saucer space ship through various solar systems in search of large asteroids. Once found, the player fires a mining charge at the asteroid, exposing the secret energy source hidden within, which is symbolized by a star icon. The player must collect as many stars as possible to help save their energy starved home planet, Mars. 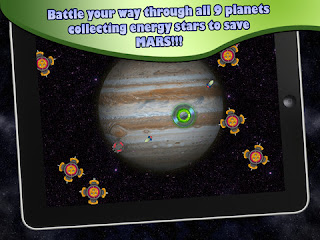 What brings the gameplay in Martian Miner to such a fevered intensity is a combination of the number of objects onscreen at any time, multiple enemy ships firing multiple rounds simultaneously, and the delicate control necessary to avoid obstacles while firing on asteroids and collecting stars. In addition, the hi-res graphics make the action so much more realistic than the original arcade games, and that realism has a powerful effect on the adrenaline pumping through the player as they attempt to turn, accelerate, fire, and turn again in seconds. Fortunately, the game includes a helpful tutorial, and graduated levels of difficulty, but the action soon becomes dizzying as the pace of play ratchets up.

The player's ship, the Marauder Mark II, resembles a silvery, spinning, CD disc. Flicking a finger on the screen accelerates the ship quickly and it slows down equally fast. It is possible to gain fine control of speed and direction by making increasingly precise touch gestures. There are three layers of 2D background animation, all moving independently, and the foreground layer contains a variety of very realistically rendered objects, each with its own mass, acceleration, and direction. When the player collects their quota of energy, they warp to the next area, but they must be on the lookout for Aliens and ship enhancements. When the game ends after all the player's lives (ships) are destroyed, a scoreboard displays complete statistics, including: Deaths, Kills, Shots, Hits, Stars, Enhancements, Playing Time, Total Score, and Credits Gained.

Ship Enhancements (2 Credits each)
* Speed Boost - quick acceleration; can be updated to increase duration of boost
* Slo-Mo - mass field causes asteroids and enemy ships to slow; upgrade to increase duration
* Shields - the probability of successfully navigating an asteroid field is 3,270 to 1, and Quantum Energy Shields help the player's odds; can be upgraded for increased duration
* Size Decrease - collecting energy increases the Marauder's size and this Mass Reduction enhancement helps reverse the disadvantage
* Nuke - destroys everything in its blast radius; can be upgraded for more power
* Gravity Ripple - smart bomb acts as a wave of motion pushing everything away from the Marauder; detonation radius can be upgraded
* Shotgun - fire 3 mining charges at a time; upgrade to increase the number of charges
* Tractor Beam - collect energy without moving; upgrade range and power
* Mass Cannon - Particle Mass Cannon fires unstoppable proton torpedoes that can destroy the largest asteroid or ship, while creating a massive gravitational disturbance
* Lasers - 1.22 gigawatt laser is ultra-accurate and will destroy asteroids - or planets
* Drone - remote controlled drone helps the Marauder collect energy
* Fast Forward - a deadly Venusian trap that causes all enemy ships and asteroids to gain a massive increase in speed
* Size Increase - an alien trap that causes the Marauder to grow in size and slow down

"I've always had a soft spot in my heart for the classics," stated Joseph Wilcox of Digital Leprechaun. "Often, the marriage of old school gameplay and modern touch technology quickly ends in divorce! But sometimes, in those rare games like Martian Miner, it just works."