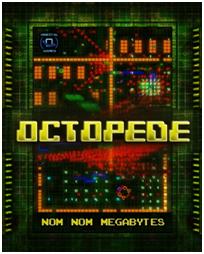 Orbital Games, Nom Nom Megabytes with Octopede!
CVG (Computer Video Games) graduates from the University of Salford defy the ever growing concerns of achieving employment status within the UK games industry by starting up their own studio: Orbital Games.
Their debut game Octopede is out now.

Manchester, UK.15/10/2011
Orbital Games consists of a programmer, an artist and a sound engineer.  It wasn’t long after the set up of Orbital Games before Octopede became a reality. With a whole host of features, Octopede shines.  A variety of deadly enemies and treacherous firewall levels, powerful weapons and huge explosions, Snake just turned Rambo in this computer survival arcade game.

Octopede requires skill and determination in order to survive the system interface. Traverse with tactical and precise movement in 8 directions adding new dimensions to the traditional 4 way method. Peril awaits those that survive the firewall onslaught. Beware of the system, it senses your presence! 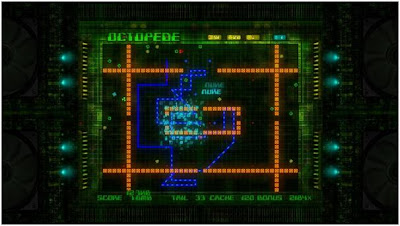 Can you defeat ‘The Core’?

Orbital Games was set up only one month after graduation. Many people have asked why the graduates did not just apply for jobs in the games industry.

“We found that the repercussions of studios closing in the UK over the last few years have affected everyone, especially the recent video game graduates. We are fighting for jobs with people that have years of experience within the games industry. Setting up Orbital Games made more sense, not only do we have creative freedom to make what we want, but we also have something that we can call our own and be proud of.” said Orbital Games Sound Engineer, Danny Gregory.

“Whilst working on group projects at University, we realised that between us we have the skills required to make video games. With a growing market for digital downloads, games stores such as Xbox Live, Desura, Steam and D2D have provided a commercially viable way for pretty much anyone to distribute their game.

We thought "We've got the skills and the distribution method, so why not do it ourselves?"
We had all dreamed of founding our own company. Straight out of University seemed like the perfect time for us to 'go it alone.” said Orbital Games programmer, Andy Longhurst. 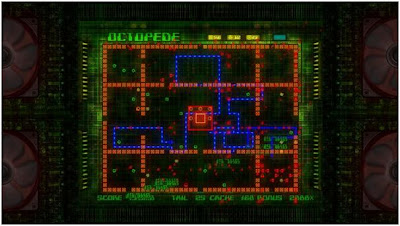 “We are really happy with the feedback and support we have already received from the community, in the space of as little as 2 months, Octopede and Orbital Games has built up a lot of interest. We wanted to complete Octopede in time for October. This month is officially Octoberpede! We are kick starting with a half price sale. Ultimately, we just excited to get our game out there for everyone to play.” said Orbital Games artist, Charlie Rawlinson

Octopede is out now on Desura and is also planned for several other sites in the very near future.
More information about Orbital Games (OG) and their debut game Octopede can be found on: www.octopede.co.uk and www.orbitalgames.co.uk

To keep up to date with what’s going on with Orbital Games follow their escapades on Twitter (@Orbital_Games), Tumblr, Facebook and all your favourite social networking sites.
Labels: announcements, new release, pc, shoot-em-up, xbox