Revenge of the Titans by Puppy Games is a tower defence game with a simple storyline about a race called The Titans attacking earth and its colonies, and you being in charge of the defences.  It’s a little more complex than a standard tower defence game though (at least the ones I’ve played), since you also have to mine materials, research technology create upgrades for your buildings, weapons and defences. 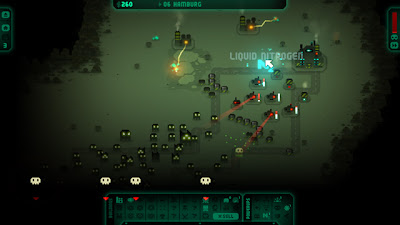 It’s all very tongue in cheek and often quite funny, while the game itself plays really well.  Depending on the level it can seem quite sedate or completely manic; you really do have to develop some decent strategies to get through the tougher levels.  The technology tree is fun and allows for plenty of customising things to your own style of play.  The game has cool retro graphics and sound effects, along with some good music tracks.  In the game you can also collect items that appear randomly on screen, which may be cash (always welcome) or a power-up (including the always-useful Smart Bomb and Super Shield!). 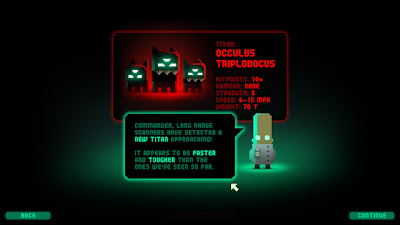 The levels feel sufficiently different to keep you interesting; sometimes you are penned into a small area with only one route to defend, sometimes you are in the middle with Titans attacking you from all sides, and everything in between.  Keeping your refineries safe is also a must – lose your stream of resources coming in and you’re definitely going to lose the game.  Creating large barricades with a few lasers behind them is usually a good strategy, but it’s not a sure-fire way to win each level...  You also have new types of enemy, with strong armour, faster movement or better weapons, coming along regularly, as well as the new technologies you’ve developed giving you different strategic options.  Of course when things get really hectic it’s difficult to have a cohesive strategy, but that’s all part of the fun!  If you lose a level (you base gets destroyed), the game gives you an analysis of what you could have done better. 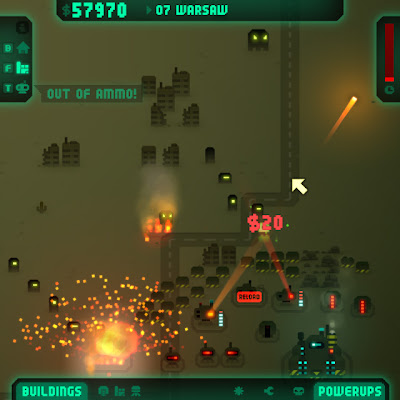 With a 50-level campaign mode, 33 different buildings and 40 technologies to research, multiple game modes, online high score table, a military ranking system as you progress and numerous medals to win, Revenge of the Titans will keep both tower defence and RTS fans happy for quite some time.    You might need to have it on maximum difficulty to provide a proper challenge, but all in all Revenge of the Titans is a hugely enjoyable game.

The boxed version (including a free Steam key) is available from Iceberg Interactive.