Pune, India - Rolocule Games today is pleased to announce the availability of Flick Tennis: College Wars HD for iPad on the Apple App Store. With the introduction of role-playing elements in the game through a comic-style storytelling, Flick Tennis brings an entirely new perspective in the sports genre on iOS. 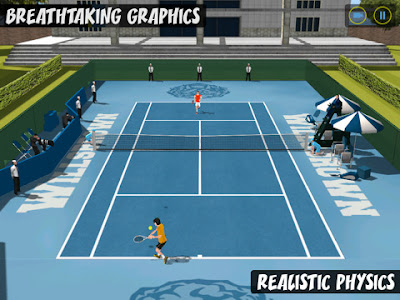 Designed specifically for the iPad, the game boasts of intuitive flick controls that make gameplay simple yet incredibly deep, giving full control of the game of tennis to the users. The users take on the role of Kevin Adams in the comic book, who must fight for his survival and become the best college tennis player. With motion-captured animations, head to head multiplayer, doubles, breathtaking 3D graphics and realistic physics, the game promises the most authentic tennis experience on iPad.

"Flick Tennis does an amazing job in capturing the intensity and joy of playing real-life tennis. It is much more than just a tennis game or any other sports game.", said Rohit Gupta, CEO of Rolocule Games. "It takes you on a journey of joy, anger, despair and jubilation. It provides gamers the same experiences as when they watch sports-based movies; only here they are the hero and themselves drive the story."

With 10 players and 11 unique tennis courts (with all 3 tennis court surfaces - Grass, Clay, Synthetic), the game provides Exhibition Mode, Head To Head Multiplayer and a Story Mode. Exhibition Mode offers customization of singles or doubles tennis match with the selection of players, court and difficulty. Story Mode features 35 pages of comic book in which the users live through a tennis fantasy. In addition to this, the users can also challenge friends and family for a head to head multiplayer duel.

Pricing and Availability:
Flick Tennis: College Wars HD 1.0 is only $3.99 USD (or equivalent amount in other currencies) and available worldwide exclusively through the App Store in the Games category.

Founded in 2010, Rolocule Games is an independent game development studio located in Pune, India. Rolocule is dedicated to creating exceptionally high quality console-like interactive entertainment softwares for next generation platforms like tablets through continuous and consistent innovation. Its mission is to entertain universally, by blending technology with art and creating most enjoyable experience for everyone. Rolocule strongly believes that art and technology often creates magic.
*visit the iTunes, App Store and Mac App Store*
Labels: ipad, new release, rpg, sports