At 84 years of age, George Weiss of Brooklyn, New York may just be the oldest app game inventor in America. And today he celebrates the release of his first app. Dabble - The Fast Thinking Word Game is now available for iPhone, iPod Touch, and iPad. 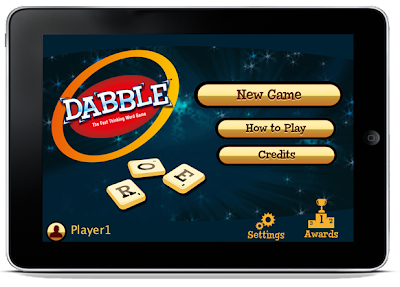 After receiving his first patent in 1958 and spending more than 50 years of tinkering and inventing in his basement workshop, George was finally able to see one of his inventions brought to market earlier this year when his Dabble word game was produced by INI, LLC and picked up for distribution by Barnes and Noble.

And now, just a few short months later, he's celebrating the release of Dabble - The Fast Thinking Word Game as an app available for download.

In Dabble, players start with 20 tiles and they race to create 5 words using their tiles. It's that simple and anyone can learn the game in just minutes.

"When I heard George's story and then when I played the game, I really fell in love with both of them. It reminded me so much about how and why I made the leap from corporate america to building and marketing my own board games and I just knew I had to work with George and his family to help bring Dabble out of his basement and onto store shelves", says Jay Vohra, INI, LLC Founder and President.

Dabble has received numerous industry awards including the 2011 Game of The Year Award by Creative Child Magazine and the 2011 PAL Award and many players are already declaring Dabble as an instant classic alongside games like Scrabble and Banannagrams.

According to George, "I never gave up. But I'd like to have the satisfaction of knowing that I didn't waste all those years!"

In 2003 Jay Vohra formed INI, LLC (Ideas Never Implemented), because he didn't want his idea to become another "could have, should have." Even though he knew very litte about the board game industry, he decided to leave the corporate world and follow his heart to invest into his idea and dream. Today INI, LLC owns and manages the distribution for their own line of I've Never games and is now the marketing and distribution platform for Dabble - The Fast Thinking Word Game.
Platform: iPhone, iPod touch, iPad, Android