Star Ninja is now available at the Xbox 360 marketplace.

Star Ninja is a fun & family friendly 2D physics based puzzle/shooter where the Ninja uses throwing stars to knock out all the pirates in this amusing and entertaining game for the XBox 360. When hit, the pirates turn into ragdolls and flop around amusingly while other pirates react to the events with funny conversational banter. Cute animations, nice effects, solid physics and funny pirates make this an entertaining game for all ages. Star Ninja is available today on the XBox Live Marketplace.

There are four game modes: Focus, Frenzy, Campaign and Speed Run. Focus mode has a limited number of stars to throw per level with a time based bonus at the end for finishing quickly. Frenzy mode has unlimited stars to throw, but a limited amount of time to use them all. The score in Frenzy mode is based on how much time it takes to clear the level. Campaign and Speed Run modes are multi-level versions of Focus and Frenzy where you play from levels 1 to 50 and the score is the total of all the levels. Includes global high score support!
http://www.star-ninja.com 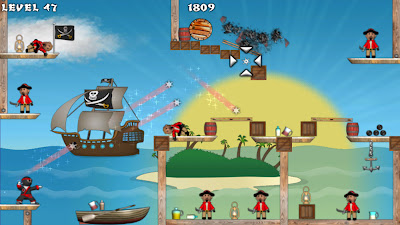 Seems incredibly like Angry Birds and other such games, only with Pirates and Ninjas instead of Birds and Pigs. Still kinda fun :)