Zagreb, Croatia - Curious Bit, an innovative mobile game developer focused on creating imaginative and original titles, has today announced the release of an update to Perfect Slice for the iPhone and iPod touch, as well as for Perfect Slice HD for the iPad and iPad 2. To celebrate the launch of Perfect Slice HD version 1.1 the developer has also announced a very limited time sale on the application that will see it's price slashed to only $0.99 (USD). This addicting, zen-inspired game, tasks players with the deceptively challenging goal of slicing variously shaped objects in half as quickly and accurately as they can. As part of its update, Perfect Slice HD version 1.1 has been outfitted with full OpenFeint and Game Center integration, something fans of the game have been eagerly awaiting for some time now. Perfect Slice HD is now available on the Apple App Store for the promotional price of $0.99 (USD) in the Games category. 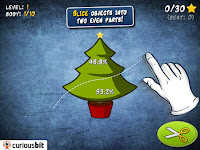 The unique mobile game perfectly illustrates why the axiom "the simpler the better" rings as true as it does. Instead of complex and convoluted gaming mechanisms and narratives, Perfect Slice HD simply gives users a single seemingly simple task - slicing a variety of objects as close to perfectly in half as they can - and allows them to freely play away in pursuit of achieving just that. The game includes two unique modes of play, Line Slice and Freestyle, which challenge players to cut objects on their iPad's screen either using only a straight line or any shaped line they choose respectively. These two modes create completely different gameplay dynamics and in essence offer players the value of two games in one. 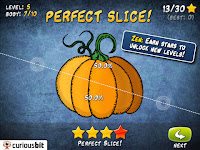 Perfect Slice HD version 1.1 is an expansive game in every sense of the word. With over a hundred sliceable objects - ranging from pumpkins to snowmen - split up into ten vastly diverse level packs, there's no shortage of uniquely entertaining gameplay to be had. For more socially inclined or outright competitive iPad gamers, the game's update has been especially fruitful. Now players are free to compete for bragging rights with other users the world over via the app's newly included interactive online leaderboards courtesy of OpenFeint, as well as through its full integration with Apple's own Game Center as well. With dozens of awards and achievements to unlock, slicing the time away one vibrant illustration at a time has never been so much fun with Perfect Slice HD! 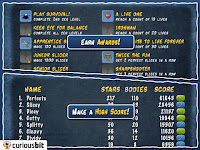 Pricing and Availability:
Perfect Slice HD 1.1 is only $0.99 USD (or equivalent amount in other currencies) and available worldwide exclusively through the App Store in the Games category.

Curious bit is an indie game development studio headed by a game industry veteran Nikola Mosettig. There's a lot going on in Curious Bit. The studio strives to create curious, innovative, experimental games, and hopes to keep pioneering on the mobile gaming front for some time to come! Copyright (C) Curious Bit 2011. All Rights Reserved. Apple, the Apple logo, iPhone, iPod and iPad are registered trademarks of Apple Inc. in the U.S. and/or other countries.