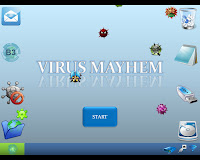 If you like fast and furious... erm... click 'em ups(?), you'll enjoy Virus Mayhem.  It's a game about protecting your computer (in the middle of the screen) from evil viruses and Trojans.  You do this simply by clicking on them to make them disappear - which starts off as something really easy to do, sedate even (despite the timer).  However after a few levels the madness really starts and it's time to test whether that switch on your left mouse button is really in shape. 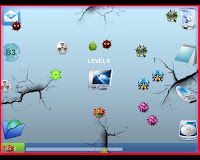 Fast, furious and fun, Virus Mayhem (by "Spike Projects") lives up to its name and can be played on the developer's blog.  There are a few problems with the game at the moment, which hopefully will be resolved as the game is developed further:
I'll keep you posted on any updates to the game.
Labels: flash, new release