MELBOURNE, AUSTRALIA AND NEW HAVEN, CONNECTICUT – July 8, 2011 – Moment Games is proud (and excited!) to announce Life in the Dorms, a comedic adventure game starring a paranoid college freshman. Join Dack Peeples as he deals with typical dorm-life issues, such as attending orientation, meeting his roommate for the very first time…hunting down serial killers and kidnappers, performing open surgery…and discovering the many surprising uses for ramen noodles. 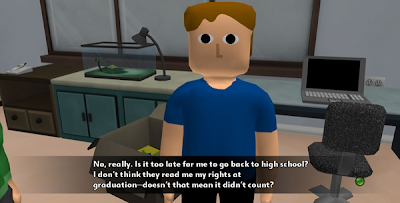 Crafted in the spirit of classic adventure games, Life in the Dorms also brings some modernity to the genre by introducing a new, social media-inspired feature. After Dack collects the smart phone item, he'll be able to "Flitter" to his followers about his environment, the people around him, and even things in his inventory—in fact, he'll have to, in order to solve many of the game's challenging puzzles.
Other features of Life in the Dorms include:
·         An engrossing, comedic story about friendship, love, and noodles
·         Sharp dialogue written by an acclaimed humor writer
·         A New Game + mode! (Yes, in an adventure game.)
·         Absolutely no zombies
Life in the Dorms is the spiritual successor to Office DisOrders, Moment Games' first title, which was released in early 2010. It's a collaboration between Ted Hung (creator of Office Disorders) and Paul Franzen (Editor-in-Chief of GameCola.net), and it's currently slated for an end-of-year release on the Xbox Live Indie Games channel. Additional details can be found at Moment Games' official website, and gamers are encouraged to follow the game's progress on Facebook and Twitter.
About Moment Games
Moment Games is an independent game studio based in Melbourne, Australia and formed by former LucasArts, THQ, and Electronic Arts employee Ted Hung in 2008. We view games as a new medium of storytelling, and our mission is to create interactive games that focus on telling a great story. For more information, please visit http://momentgames.com.
Labels: adventure, preview, xbox