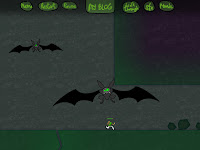 Cave Puzzles: A Gift is a new Flash game by Oleg Vorontsov, available to play on Kongregate.  It contains the simplest of plots - escape the cave you're trapped in, and try to pick up a nice gift for your girlfriend while you're at it. 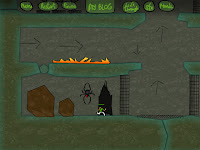 At first Cave Puzzles: A Gift seems to be little more than an extremely simple platform game, but in fact it's much more than that.  The game slowly introduces different types of puzzles to you, after a few levels including some quite devious ones.  Dexterity with the controls is sometimes needed, a bit of lateral thinking is often needed, and on some occasions you need both.  It's a shortish game (should take about an hour to complete), but definitely an enjoyable one.

The fact that each level introduces something new into the game is a very nice feature.  The sketch-like cartoony graphics aren't exactly advanced but they do have a certain charm.  It has a funky jazz soundtrack and remembers your progress when you return later - two more plus points!  The game also features realistic physics, which is another plus point though it does sometimes feel like a negative when gravity works against you...

Kongregrate have some really good games. Started playing their games with Pandemic 2 and never stopped. Good for coffee breaks at work and such :D