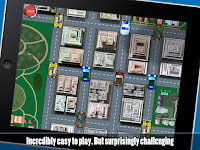 In this level based game, the player controls several cars, some of them ecologic and clean, that will find their way out of the city, and some polluting ones that will crash and stay in the streets of some of the most beautiful American cities. From New York to Las Vegas, visiting Washington, Miami, Houston, Chicago, San Francisco, Los Angeles and Hollywood along the way.

With a brand new game idea, Push-Cars will have you hooked with its irresistible gameplay. You only have to use one finger to position the cars in the desired direction and hit Play to make them move and clear each level. Easy to play, but with a smooth difficulty curve that will keep you craving for more! There is more than one way to resolve each level, but only one will give you the three wheels of fame.

Language Support:
* US English and Spanish

Pricing and Availability:
Push-Cars 1.0 is only $0.99 USD (equivalent amounts in other currencies). Push-Cars HD 1.0 for iPad is only $1.99 USD. Both are available worldwide exclusively through the App Store in the Games category.


Located in beautiful Barcelona, Spain, Ivanovich Games is a privately held company founded in 2009 by independent developer Ivan Cascales. With an focus on innovation, Ivan has a passion for developing useful and entertaining applications for the iPhone platform.