Kot-in-Action Creative Artel is proud to announce that the official website for Steel Storm, an episodic top-down shooter, is now live. Episode I, which will be released for free, is coming to public beta this September, for Windows, Mac, and Linux.

Steel Storm is an old school top down arcade shooter with score oriented competitive gameplay, and is designed for people who like fast paced action and have limited amounts of time to play computer games.

The events of the game take place in an alternative universe where you control an advanced hovertank, packed with the most advanced and sophisticated weapons. Your task is simple, but, nevertheless, is not trivial. In the fight with presumed extraterrestrial invaders, you must prevail! 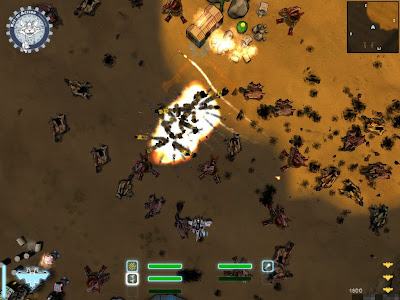 ·         6 new weapons;
·         3 huge and deadly bosses;
·         10 more types of enemies;
·         4 more unique environments;
·         2 new campaigns totalling 18 missions;
·         Game Source Code;
·         Mod Development SDK;
·         and more!
Kot-in-Action invites all old-school shmup fans to register on our forums and join our official IRC channel and get ready for the beta. Preorders are also available for the upcoming second episode. Screenshots, video, and further description can be found at http://www.steel-storm.com. About Kot-in-Action Creative Artel Kot-in-Action Creative Artel is a new independent developer based in Del Rio, TX with team members in the U.S., Poland, Russia, and Germany. Steel Storm is their first release. More information can be found at http://www.kot-in-action.com.