Liverpool-based start-up App developers The Lonely Bee have just put the finishing touches to their first foray into iPhone gaming - Eggs in Space. The preview website and video is online now at www.eggsinspacegame.com

Released to the App Store in early September 2010, Eggs in Space is a fun and colourful blast. It's up to the player to stop those pesky ovals before they destroy the innocents of the planet Spoonville. The aim of the game is to tap the evil eggs while avoiding hitting the booby-trapped red eggs in a bid to halt the invading armada.

The game itself is easy to pick up and play, but impossible to put down, the tap 'n' crack play is intuitive and challenging in equal measure. As the waves progress the eggs become ever trickier with fearsome bosses to overcome and a bonus 'egg scramble' mode where time also becomes your enemy and things become more frantic.

Along the way through the non-stop waves the player will pick up numerous Egg Cup awards, which are all linked into the superb Open Feint IOS social platform that already serves over 30 million Apple gamers. Here you can compete to be the best player of Eggs in Space, comparing your high score, eggs smashed and waves cleared with the best in the world.

The first thing that strikes you about Eggs in Space is the bold and original visuals that come from the mind of expert animator and director Andy Cooper. The 2D characters are reminiscent of Parappa the Rapper, the environment and gameplay feeling like you are inside a 3D Space Invaders. Playing Eggs in Space is like watching Easter eggs getting hurled at you in zero-gravity through a kaleidoscope.

Each egg has its own personality, which is helped by the superb sound effects from musician Chris Barker. His soundtrack is a superb take on B movie sci-fi music, it's laden with eerie synths and theremins that float above the modern, slow-burning house-tinged beats and wobbly bass-lines. This is one app that you should dig out the headphones for.

Eggs in Space was made within the Unity Pro software development suite - an excellent tool for creating games on any platform. With this being The Lonely Bee's first real experience at creating a game we approached things slightly differently, which we believe has benefited rather than hampered our first release.

The Lonely Bee's lead developer John Keefe explains, "We wanted our app to have its own signature style, so we created a 3D environment in which we placed our vivid 2D characters. Making an unusual game wasn't the most straightforward approach to our first release, but we believed it focused us into making a better and more original product."

Eggs in Space will retail in the Apple App Store from mid-September for only $1 (59p). For more information head to www.eggsinspacegame.com and to check out our development blog go to www.thelonelybee.com
Eggs in Space Trailer: 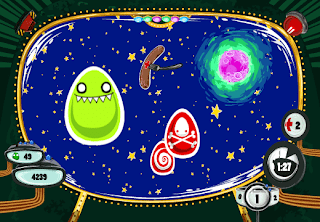 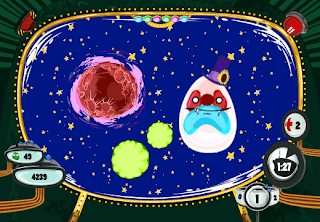 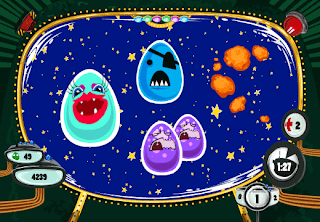 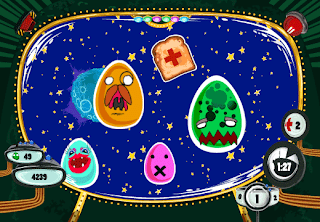